The Ligure Club’s roots are founded in Temescal district of Oakland, which for much of the 20th century was a thriving Italian community. The Ligure Club takes its name from Ligoria, a region in northern Italy that includes the port city of Genova, and from which many of the club’s original members came from.

At the turn of the last century, a large wave of Italian immigration brought many Ligurians from Genoa to San Francisco. Since only the lowliest jobs were open to unskilled immigrants, many of the Genoese newcomers began scavenging for garbage in horse-drawn wagons. As competition in San Francisco was fierce, some of these immigrants settled in the East Bay, most of them living in West Oakland.

The Genovese scavengers who moved to Temescal continued their activities as independent garbage collectors until 1909, when rivalry induced them to form the the Oakland Scavenger Association. This co-op incorporated in 1915 as the Oakland Scavenger Company. Every employee of this all-Italian membership corporation was a shareholder, and shares were transferred by their owners only to family members or other shareholders.

As a testament to the growing power of the Oakland Scavenger, in 1933 the city of Oakland named a street near its garbage wharf after the company’s longtime president, Thomas Ferro.

The Beginning of a Club

Business prowess offered no guarantee of social acceptance. Like other Italian-American groups, the Genovese scavengers of Temescal socialized within their own circle. In the early 1930’s this included an informal gathering of a few Italian friends in Joe Mangini's basement where they would meet to crush grapes and make homemade wine. When they had finished, they would often sit and share stories over a glass of wine and some cold cuts. This evolved into a weekend ritual, and soon Joe suggested turning this informal group of friends into a formal social club. Giulio Biggi offered his basement for the group’s first meeting and the Ligure Club was born. 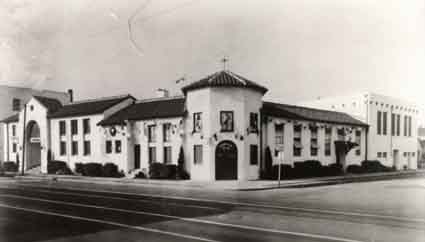 John Ginochio was considered the “father” of the Ligure Club as he helped to evolve the club from small social gatherings in the basements of members located in the Temescal neighborhood of Oakland to larger gatherings in a formal clubhouse.  In order to accomplish this Ginochio founded an organization called the Ligure Hall Association in order to raise funds for the construction of a new clubhouse.  Ginochio was the first and only president of the Ligure Hall Association. They raised $30,000 to erect the Ligure Hall  opened its doors on December 7, 1934, at 4799 Shattuck Avenue in Oakland.

The 21,000-square-foot building was designed in Mediterranean style, with a whitewashed stucco walls and clay-tile gable roofs. The two-story wing facing Shattuck Avenue had a separate entrance leading to a lofty, 66-by-56 foot ballroom. At the street corner, a hexagonal turret flanked by somewhat lower wings opened onto a long barroom, which in turn led to an indoor bocce ball court located behind the ballroom. Facing 48th Street, a taller, flat roof annex enclosed a large room on the second floor. A kitchen and banquet hall occupied the basement.

By 1962, the Ligure Club had more than 900 members, but flight to the suburbs eroded the membership at a time when social integration was reducing the need for exclusively Italian clubs.

The Ligure Club operated at this Shattuck Avenue location until 1981, when financial issues and dwindling membership forced the club to close clubhouse and sell the building, and relocate its activities to the Fratellanza Club.

Today the Ligure Club is a thriving social organization that continues to supports the Italian community. Club events continue to be hosted at the Fratellanza Club, which is located at 1140 66th Street in Oakland.

*** Excerpts of this are courtesy of Daniella Thompson. To read more please see full article at http://berkeleyheritage.com/eastbay_then-now/ligure.html ***